I have finished reading the book, “Unstoppable Every 1,500 Years Global Warming” by S. Fred Singer and Dennis T. Avery. 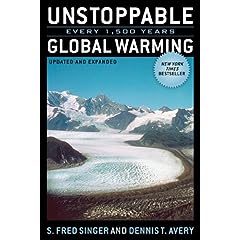 The book is fascinating and well documented; it is dedicated to:

“those thousands of highly qualified research scientists who have documented physical evidence of the 1,500 year climate cycle from over the entire globe. Hundreds of their studies endorse the reality of this cycle. They have gone, literally, to the ends of the Earth–often in harsh conditions, climbing tall mountains and huge glaciers, sailing frigid seas, sitting cramped at consoles in long-range aircraft, digging painstakingly in remote sites for pollen and human artifacts–to help us understand our planet’s climate changes. They have done it with virtually no encouragement from the press and the public. Too often, they have had to work in the fact of hostility from their colleagues in the climate modeling community who are selling the fake ‘consensus’ of anthropogenic [man-made] global warming. We applaud them and their work.

The three scientists who led the discovery of the 1,500-year cycle–Willi Dansgaard of Denmark, Hans Oeschger of Switzerland, and Claude Lorius of France–were jointly awarded the Tyler Prize (the ‘environmental Nobel’) in 1996. However, their award citations say nary a word about the climate cycle they discovered, nor anything about its predictive power to forecast moderate climate changes. The public has remained virtually unaware that the 1,500-year cycle offers the only explanation for the modern warming that is supported by physical evidence.”

The book is only 277 pages, and is not incomprehensible scientific gobbledy-gook, but well-written explanatory science. It has nearly 500 footnotes, mainly citations of a broad range of published scientific papers.

They take the emotional arguments about a scientific “consensus” for a scary global warming scenario and show them to be false; they are not based in any facts worth giving credence to. In any event, this book is highly recommended if you are concerned about this planet and global warming. You should be concerned and interested, but not for the reasons being promoted in the newspapers, TV and radio. The media has got it completely wrong, as they so often do.

ADHD drugs stunt the growth of children who take them….
Caffeine-related disorder